We Provide A Wide Variety of solar products

SOM ENERGY is the world’s biggest integrated solar enterprise, offering products and services across the solar energy production spectrum. The cutting-edge equipment, which includes machinery and equipment obtained from best-in-class vendors, intends to aid in cost leadership, operational scalability, and dependability standards in line with worldwide benchmarks. It has built world-class transportation and utility infrastructure portfolios with a footprint across India. 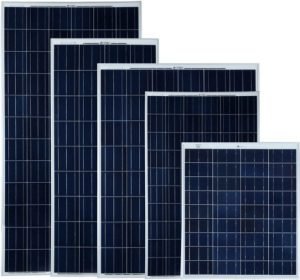 We provide a wide variety of solar modules. Both Polycrystalline and Monocrystalline panels. We also have different sizes and capacity available with us. 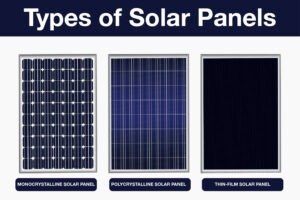 Also called solar panels, a solar module is a single photovoltaic panel that is an assembly of connected solar cells. The solar cells absorb sunlight as a source of energy to generate electricity. An array of modules are used to supply power to buildings.

A solar module typically consists of an assembly of 6×10 solar cells. Because of this, the solar cells’ efficiency and wattage output can vary depending on the type and quality of solar cells used. A solar module can range in energy production from 100-365 Watts of DC electricity. The higher the wattage output, the more energy production per solar module. A solar array of modules consisting of higher energy-producing solar modules will, therefore, produce more electricity in less space than an array of lower producing modules. However, the cost is higher for greater producing modules.

Solar Panels Made of Thin Film

WITH RISING ENERGY DEMAND AND ENVIRONMENTAL CONCERNS, SOLAR ENERGY IS ONE OF THE MOST INTERESTING RESOURCES FOR RENEWABLE ENERGY. Several solar cell methods, including wafer, thin-film, and organic, have been researched to achieve high efficiency and cost-effectiveness. Wafer-based silicon solar cells account for up to 90% of the world’s photovoltaic (PV) markets since they are the highest efficiency solar cells available. Thin-film solar cells, on the other hand, would be favored over more traditional wafer-based devices due to lower active material consumption, which makes them more cost-effective.

While there are automatic methods available to conduct the work, many people prefer human solar panel cleaning for a variety of reasons. Solar panel cleaning is a chore that must be accomplished. For those who have opted not to install any of the solar panel cleaning technologies available, we would want our residential and commercial clients to keep in mind while completing the task yourself. Take precautions. When cleaning solar panels on your roof, use utmost caution and attention. This may appear to be a no-brainer, yet it is possibly the most crucial argument we can make. Clear away all debris from your panels.

Clear away all dirt from your panels. This includes sticks, leaves, and any other material that might create a problem in your panels. Before cleaning, inspect the panels for exposed wires or cracks. If you notice any, make sure to patch them before you wash. If possible, use gentle water. Hard water can cause persistent calcium deposits on your solar panels, reducing their effectiveness. Select the best cleaning solution. Some cleaning chemicals might cause solar panels to fail. Gently scrub. When cleaning your solar panels, be gentle. When drying, be gentle. Scrubbing or drying too aggressively might produce scratches on panels.

We provide Only the best solar products

One Stop Solution for your every Solar need!

When Energy is coming from the Sun, Why are we digging the earth..??

You are here » Home » SOLAR MODULES

The time is right now solar is the Future

Get Latest news & Exclusive Offers in the Solar Energy Market.